What if you were in Ethiopia, walking by a school, directing your mobile’s camera to towards it and suddenly you get all the information available about the school, such as the development projects involved with it, the amount invested to build it, and the school’s drop out rate.

How transparent is development aid?

** **Is it only sciene-fiction? Welcome to augmented reality and the plans to use open data in the future. Owen Barder talked about the exact same idea in a recent podcast at the Center for Global Development. Of course, it is questionable whether concrete information stream is instantly needed; it might easily overwhelm us, but certainly this kind of transparency might have a huge impact on development aid.

Most people agree that the development aid world needs more transparency. It is not easy or almost impossible to get an overview of what really happens in a country or a sector. Senegal alone has 82 individual aid co-ordination forums, but that has not brought the transparency needed, and made it even more complicated, as Owen Barder writes in his thoughtful and provoking post: “The coming collapse of the development system”. A transparent overview on all activities, partnerships and financial involvements, could bring light in this unnecessary complexity.

Many organizations and some governments have started opening up their repositories of data to be accessed publicly, such is the example of the development sector, where first organizations have freed their data. The World Bank has an API to access data, and the UK Department for International Development  (DFID) has a new way to present its project data. Whereas the former offers statistical data, such as development indicators, the latter publishes project information to be monitored. But come on … is that all?

Initiatives to use open data 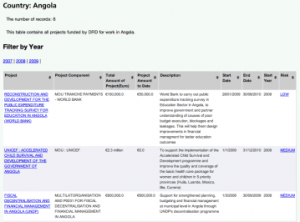 Such open data could be used by external initiatives or watchdogs. A good example for development in Africa is the Ujima project, which shows project data from USAid and DFID. Unfortunately, the majority of organizations seem to be only discussing the move to open data, but until now, they rather enclose information. To be fair, many development organizations have a huge challenge – they have various different databases, formats and struggle to get them better connected as well. One example is the challenge around Management Information System.

Another promising example in this regard is Aid Info, which tries to join forces and convince organizations to agree on a common format. Obviously, there is a long way to arrive to the example described at the beginning of the article, but it becomes discernible that open data is the way forward. In the area of open government we can see how much creativity such open data can unleash.

The downfall of PDFs and what it says about Knowledge Management